A reanalysis of data collected by ESA�s Mars Express during the first 20 months of NASA�s Curiosity mission found one case of correlated methane detection, the first time an in-situ measurement has been independently confirmed from orbit.

Reports of methane in the martian atmosphere have been intensely debated, with Mars Express contributing one of the first measurements from orbit in 2004, shortly after its arrival at the Red Planet. 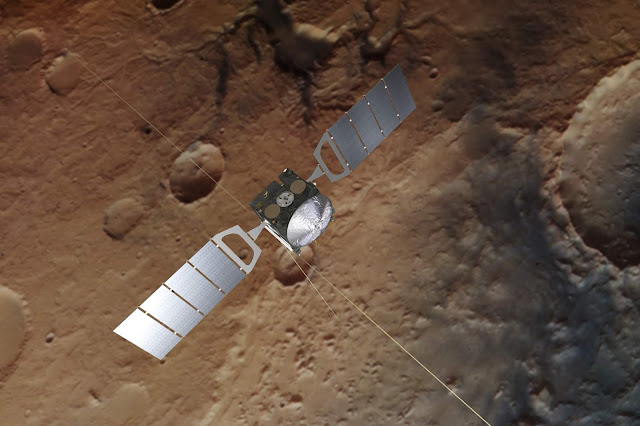 The molecule attracts such attention because on Earth methane is generated by living organisms, as well as geological processes. Because it can be destroyed quickly by atmospheric processes, any detection of the molecule in the martian atmosphere means it must have been released relatively recently � even if the methane itself was produced millions or billions of years ago and lay trapped in underground reservoirs until now.

While spacecraft and telescopic observations from Earth have in general reported no or very low detections of methane, or measurements right at the limit of the instruments� capabilities, a handful of spurious spikes, along with Curiosity�s reported seasonal variation at its location in Gale Crater, raise the exciting question of how it is being generated and destroyed in present times.

Now, for the first time, a strong signal measured by the Curiosity rover on 15 June 2013 is backed up by an independent observation by the Planetary Fourier Spectrometer (PFS) onboard Mars Express the next day, as the spacecraft flew over Gale Crater. 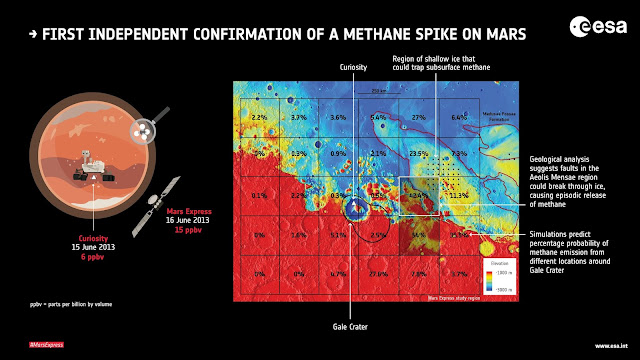 The study exploited a new observation technique, allowing the collection of several hundred measurements in one area over a short period of time. The teams also developed a refined analysis technique to get the best out of their data.

�In general we did not detect any methane, aside from one definite detection of about 15 parts per billion by volume of methane in the atmosphere, which turned out to be a day after Curiosity reported a spike of about six parts per billion,� says Marco Giuranna from the Institute for Space Astrophysics and Planetology in Rome, Italy, the principal investigator for the PFS experiment, and lead author of the paper reporting the results in Nature Geoscience today.

�Although parts per billion in general means a relatively small amount, it is quite remarkable for Mars � our measurement corresponds to an average of about 46 tonnes of methane that was present in the area of 49 000 square kilometres observed from our orbit.�

Ten other observations in the Mars Express study period that reported no detections at the limit of the spectrometer�s sensitivity corresponded to a period of low measurements reported by Curiosity.

At the time of the Curiosity detection, it was speculated that the methane originated north of the rover, because the prevailing winds were southward, and that the release likely occurred inside the crater.

�Our new Mars Express data, taken one day after Curiosity�s recording, change the interpretation of where the methane originated from, especially when considering global atmospheric circulation patterns together with the local geology,� adds Marco.

�Based on geological evidence and the amount of methane that we measured, we think that the source is unlikely to be located within the crater.�

Marco and his colleagues made two independent analyses to home in on potential source regions of the methane, dividing up a wide region around Gale Crater into grids of about 250 by 250 square kilometres.

In one study, collaborators from the Royal Belgian Institute for Space Aeronomy in Brussels applied computer simulations to create one million emission scenarios for each square, in order to predict the probability of methane emission for each of those locations. The simulations took into account the measured data, expected atmospheric circulation patterns, and methane release intensity and duration based on the geological phenomenon of �gas seepage�.

In the other parallel study, geologists from the National Institute of Geophysics and Volcanology in Rome, Italy and the Planetary Science Institute in Tucson, Arizona, scrutinised the region around Gale Crater for features where gas seepage is expected � these are the kind of features that might be associated with methane release. 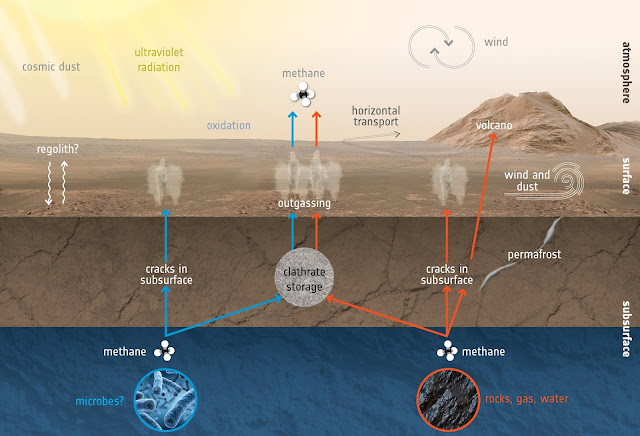 How to create and destroy methane at Mars

This process is well known on Earth to occur along tectonic faults and from natural gas fields, with a variety of release intensities. For example, on Earth, gas emission from active mud volcanoes is typically continuous with background variations, but also with sudden strong bursts, while other seeps might release gas intermittently.

Episodic gas release, that is, generally long quiescence with no emission in between short-duration bursts, is typical of the expulsion of gas from small or �dying� seeps or due to seismic events. On Mars, episodic gas expulsions could also be created during a meteorite impact, liberating gas trapped below the surface.

�We identified tectonic faults that might extend below a region proposed to contain shallow ice. Since permafrost is an excellent seal for methane, it is possible that the ice here could trap subsurface methane and release it episodically along the faults that break through this ice,� says co-author Giuseppe Etiope from the National Institute of Geophysics and Volcanology in Rome.

�Remarkably, we saw that the atmospheric simulation and geological assessment, performed independently of each other, suggested the same region of provenance of the methane.�

�Our results support the idea that methane release on Mars might be characterised by small, transient geological events rather than a constantly replenishing global presence, but we also need to understand better how methane is removed from the atmosphere, and how to reconcile the Mars Express data with results from other missions,� adds co-author Frank Daerden from the Royal Belgian Institute for Space Aeronomy in Brussels.

�We will re-analyse more of the data collected by our instrument in the past, while continuing our ongoing monitoring efforts, including coordinating some observations with the ExoMars Trace Gas Orbiter,� concludes Marco.

The ESA-Roscosmos ExoMars Trace Gas Orbiter, which is designed to make the most detailed inventory of the martian atmosphere yet, began its science observations in April 2018.

�With the spacecraft and its payload still operative, Mars Express is one of the most successful space missions to be sent to Earth�s planetary neighbour. We expect more exciting science from joint efforts by both ESA orbiters at Mars.�

�Independent confirmation of a methane spike on Mars and a source region east of Gale Crater� by M. Giuranna et al is published in Nature Geoscience: https://www.nature.com/articles/s41561-019-0331-9