At the 66th Rencontres de Moriond conference, which is taking place in La Thuile, Italy, physicists working at CERN are presenting their most recent results. Since the start of the conference on 16 March, a wide range of topics from measurements of the Higgs boson and Standard Model processes to searches for rare and exotic phenomena have been presented.

The Standard Model of particle physics is a successful theory that describes how elementary particles and forces govern the properties of the Universe, but it is incomplete as it cannot explain certain phenomena, such as gravity, dark matter and dark energy. For this reason, physicists welcome any measurement that shows discrepancies with the Standard Model, as these give hints of new particles and new forces � of new physics, in other words. At the conference, the ATLAS and CMS collaborations have presented new results based on up to 140fb�1 of proton-proton collision data collected during Run 2 of the Large Hadron Collider (LHC) from 2015 to 2018. Many of these analyses benefited from novel machine-learning techniques used to extract data from background processes.

Since the discovery of the Higgs boson in 2012, ATLAS and CMS physicists have made significant progress in understanding its properties, how it is formed and how it interacts with other known particles. Thanks to the large quantity of Higgs bosons produced in the collisions of Run 2, the collaborations were able to measure most of the Higgs boson�s main production and decay modes with a statistical significance far exceeding five standard deviations. In addition, many searches for new, additional Higgs bosons have been presented. From a combination of all Higgs boson measurements, ATLAS obtained new constraints on the Higgs self-coupling. CMS has presented updated results on the Higgs decay to two Z bosons and has also derived new information on the strength of the interaction between Higgs bosons and top quarks. This interaction is measured in two ways, using top quark pairs and using a rare process in which four top quarks are produced. The probability of four top quarks being produced at the LHC is about a factor of ten less likely than the production of Higgs bosons together with two top quarks, and about a factor of ten thousand less likely than the production of just a top quark pair. 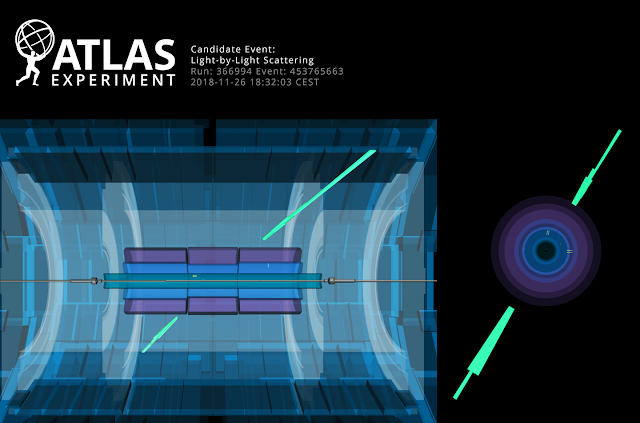 The ATLAS collaboration has also reported first evidence for the simultaneous production of three W or Z bosons, which are the mediator particles of the weak force. Tri-boson production is a rare process predicted by the Standard Model, and is sensitive to possible contributions from yet unknown particles or forces. The very large new dataset has also been used by the ATLAS and CMS collaborations to expand the searches for new particles beyond the Standard Model at the energy available at the LHC. One of the possible theories is supersymmetry, an extension of the Standard Model, which features a symmetry between matter and force and introduces many new particles, including possible candidates for dark matter. These hypothetical particles have not been detected in experiments so far, and the collaborations have set stronger lower limits on the possible range of masses that they could have. 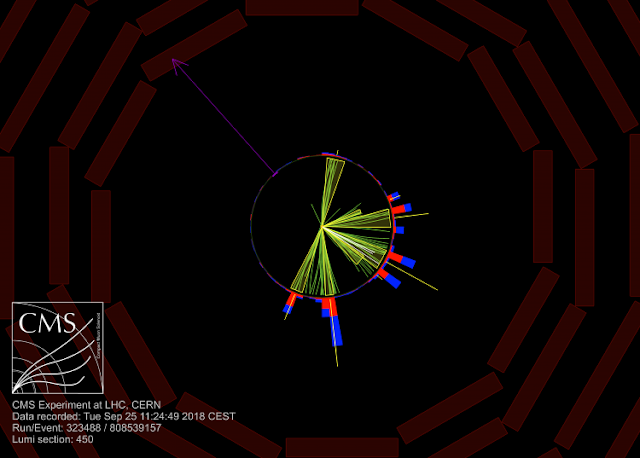 Image above: A collision event recorded by CMS, containing a missing-transverse-energy signature, which is one of the characteristics sought in the search for SUSY (Image: CMS/CERN).

The CMS collaboration has placed new limits on the parameters of new physics theories that describe hypothetical slowly moving heavy particles. These are detected by measuring how fast particles travel through the detector: while the regular particles propagate at speeds close to that of light, straight from the proton collisions, these heavy particles are expected to move measurably slower before decaying into a shower of other particles, creating a �delayed jet�. CMS has also presented first evidence for another rare process, the production of two W bosons in not one but two simultaneous interactions between the constituents of the colliding protons.

In addition, ATLAS and CMS have presented new studies on the search for hypothetical Z’ (Z-prime) bosons. The existence of such neutral heavy particles is predicted by certain Grand Unified theories that could provide an elegant extension of the Standard Model. Although no significant signs of Z’ particles have been observed thus far, the results provide constraints on their production rate.

The LHCb collaboration has presented several new measurements concerning particles containing beauty or charm quarks. Certain properties of these particles can be affected by the existence of new particles beyond the Standard Model. This allows LHCb to search for signs of new physics via a complementary, indirect route. One much anticipated result, shown for the first time at the conference, is a measurement using data taken from 2011 to 2016 of the ratio of two related rare decays of a B+ particle. These decays are predicted in the Standard Model to occur at the same rate to within 1%; the data collected are consistent with this prediction but favour a lower value. This follows a pattern of intriguing hints in other, similar decay processes; while none of these results are significant enough to constitute evidence of new physics on their own, they have captured the interest of physicists and will be investigated further with the full LHCb data set. LHCb also presented the first observation of matter�antimatter asymmetry known as CP violation in charm particle decays, as reported in a dedicated press release last week.

Finally, using the results of lead-ion collisions taken in 2018, the ATLAS collaboration has been able to clearly observe a very rare phenomenon in which two photons � particles of light � interact, producing another pair of photons, with a significance of over 8 standard deviations. This process was among the earliest predictions of quantum electrodynamics (QED), the quantum theory of electromagnetism, and is forbidden by Maxwell’s classical theory of electrodynamics.

CERN, the European Organization for Nuclear Research, is one of the world�s largest and most respected centres for scientific research. Its business is fundamental physics, finding out what the Universe is made of and how it works. At CERN, the world�s largest and most complex scientific instruments are used to study the basic constituents of matter � the fundamental particles. By studying what happens when these particles collide, physicists learn about the laws of Nature.

The instruments used at CERN are particle accelerators and detectors. Accelerators boost beams of particles to high energies before they are made to collide with each other or with stationary targets. Detectors observe and record the results of these collisions.

Founded in 1954, the CERN Laboratory sits astride the Franco�Swiss border near Geneva. It was one of Europe�s first joint ventures and now has 23 Member States.