Our protective magnetic field is always restless, but every now and then something weird happens � it jerks. Although scientists have known about these rapid shifts for some 40 years, the reason why they occur has remained a frustrating mystery, until now.

Since geomagnetic jerks were discovered in 1978 scientists have been trying to work out why the magnetic field suddenly and unexpectedly accelerates.

Looking back at measurement records from the worldwide network of ground-based magnetic observatories, they found that that these jerks, which appear as sharp V-shaped features in graphs of magnetic-field changes, date back as far as 1901, and that the phenomenon occurs about every three to 12 years. Also, they are not consistent across the globe. In 1949, for example, a jerk was measured in North America, but was not detected in Europe. 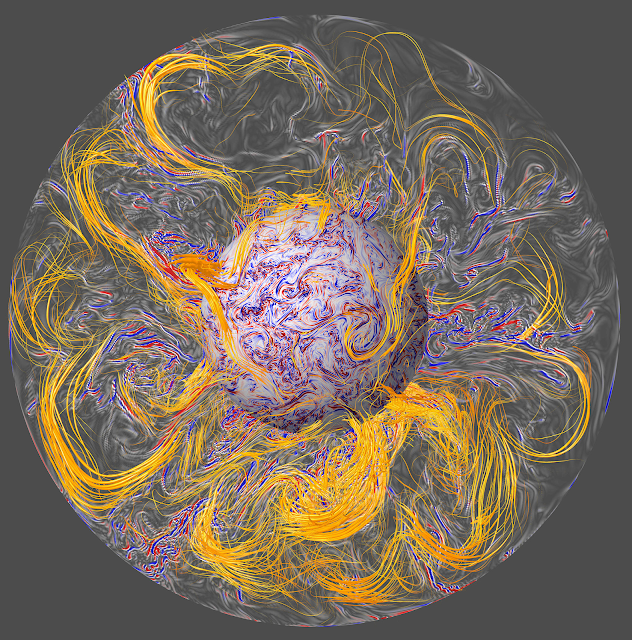 Simulation of the magnetic field in Earth�s core

Since they occur relatively randomly and the mechanism that drives them has been poorly understood, these jerks have frustrated attempts to forecast changes in the magnetic field, even for a few years ahead.

Forecasts are important because the magnetic field protects us from solar storms, which have the potential to disrupt power supplies, communication links and navigation systems, for example.

Bearing in mind that ground-based magnetic observatories are built on land, information about these jerks has been incomplete as the ocean, of course, covers 70% of Earth�s surface. But thanks to ESA�s trio of Swarm satellites, which measure variations in Earth�s magnetic field from space, scientists can now study the global structure of geomagnetic jerks. 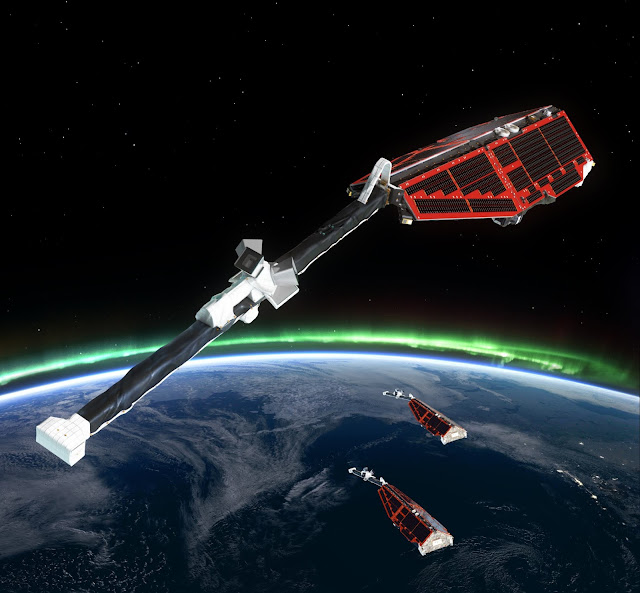 In a paper published recently in Nature Geoscience scientists from the Paris Institute of Earth Physics and the Technical University of Denmark describe how they created a computer model for geomagnetic jerks and they have offered an explanation as to why they happen.

Our magnetic field is generated mainly by the churning of fluid within Earth�s core. Researchers know of two types of movement that cause different variations in the magnetic field: those resulting from slow convection movement, which can be measured on the scale of a century, and those resulting from rapid hydromagnetic waves, which can be detected over a few years. 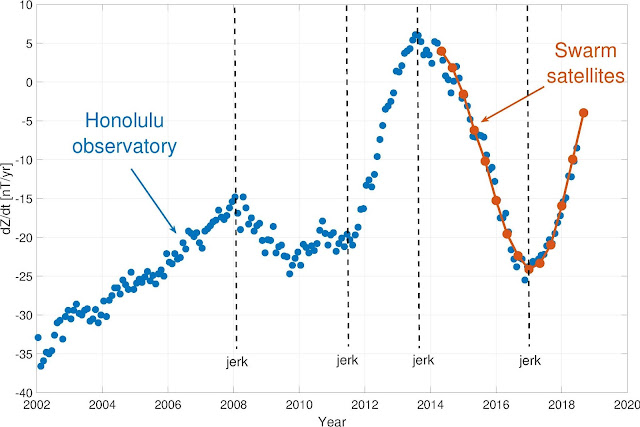 They suspected that the latter type play a role in the jerks, but the interaction of these fast waves with slow convection, along with their mechanism of propagation and amplification, had yet to be revealed.

Now, the researchers have been able to document the series of events that lead to jerks which, in the simulation, arise from hydromagnetic waves emitted within the core. As molten matter rises up to reach the outer surface of the Earth�s core, it produces powerful waves along the magnetic field lines near the core. The team explained that this results in sharp changes in the flow of liquid beneath the magnetic field.

The jerks originate in rising blobs of metal that form in the planet�s core 25 years before the corresponding jerk takes place. These current findings are part of a longer-term project in which scientists hope to predict the evolution of the geomagnetic field over the coming decades. 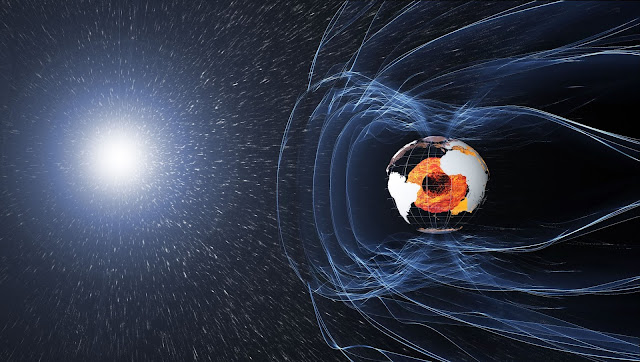 The force that protects our planet

Chris Finlay, from DTU Space, said, �Swarm has made a real contribution to our research, allowing us to make detailed comparisons, in both space and time, with physical theories on the origin of these magnetic jerks.

�While our findings make fascinating science, there are some real-world benefits of understanding how our magnetic field changes.

�Many modern electronic devices such as smart phones, rely on our knowledge of the magnetic field for orientation information. Being able to better forecast field changes will help with such systems.�